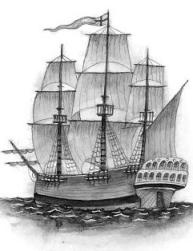 The only way to get to Australia in the old days was by ship.

Sailing to Australia was tough. Ships were crowded and uncomfortable. Hundreds of people were crammed onto a wooden boat, about 10 metres wide by 35 metres long (that's a bit longer and thinner than a netball court).

The passengers and crew shared this cramped space for several months. If the weather was bad, the trip could take as long as six months. Then food would run short. 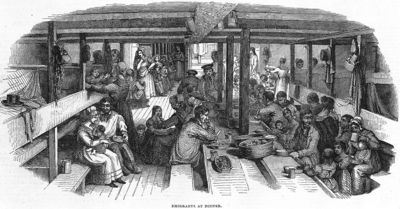 Like Letty, most travellers ate and slept in dormitories below decks. In storms, water washed through the toilets into the sleeping areas. Rough weather was dangerous for sailors working on the deck too.

Some of Australia's early settlers paid a terrible price to come here. On most voyages, several people died - especially children. The food was sometimes so bad that children died of starvation. Others died in accidents, or from the illnesses that passed from one passenger to another.

This is what one Victorian father, named Henry Knight, wrote in his diary:

'11th January. A man fell into the hold of the ship with his baby. Henry and Susan [Henry's children] very poorly.

12th January. Fine day. Not so hot. Henry and Susan are dwindling. One child died this morning.

13th January. Very hot. Henry and Susan much the same. Almost a calm.

Sadly not all Henry's children made it to Australia. But many others did. Perhaps your someone in your family was one of them.