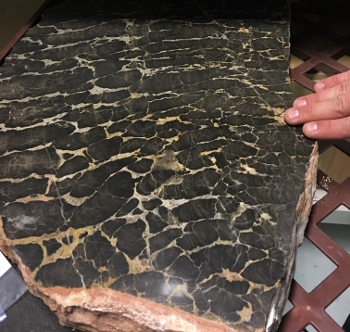 although it comes from the Northern Territory. You are looking at layers of ancient algae. Algae are a type of plant that includes seaweed and pond scum.  Once upon a time this algae lived on the floor of a shallow sea. (The rock is turned around in the photo. The bottom is on the right-hand side.) As sand settled over the top of the algae, it had to grow upwards, making the columns you can see in the picture.

An Animal that never Pooed 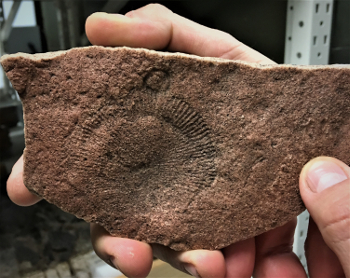 The smaller, reddish rock is the remains of an animal that lived in the Flinders Ranges in South Australia when that was under the sea. At 600 million years old, it's the oldest animal in Museum Victoria - way, way before the dinosaurs. This animal has no mouth, no stomach and nowhere to poo. To eat, it soaked in microbes through its skin.  Scientists know it's an animal because it has left-right symmetry. Unlike plants, one side of us animals is close to a mirror image of the other.