Warning: count(): Parameter must be an array or an object that implements Countable in /home/alisonll/public_html/components/com_k2/models/item.php on line 763

Devils on the Loose 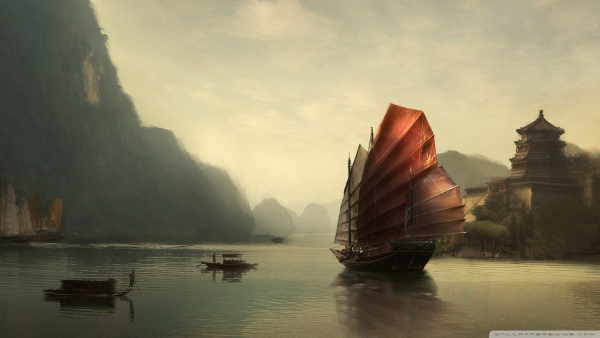 In my latest book, Dragons, Devils and Rebels, there's a chapter on what Chinese and westerners thought of each other in the early days of contact. The book's finished, but I've since been reading a biography of an Englishman who lived in Shanghai in the mid 1850's. To his shock, when he first arrived Shanghai had been overrun by rebels, and was under siege from imperial troops. Still, he was an intrepid traveller. One day he went on 'an interesting excursion' to Wusong, by boat down the Huangpu. He and his companions sailed into trouble on the way home.

'...in the evening we were puzzled to know how we should pass the Imperial fleet in safety. They are somewhat random with their fire after dark, and might easily have taken us for Chinese, if not Rebel spies. Mr Edkins came to the rescue, proposing that we should sing as we passed them, that they might know we were foreigners. This suggestion seemed good and the boatmen were pleased with the idea... We approached some ships we took to be the fleet, and passed them singing lustily. But just as we were about to congratulate one another on our success, the boatmen shouted to us to recommence, as we had been mistaken in what we supposed to have been the fleet and were just coming within range of their guns.

'So now we had to tune up again without delay...We concluded just opposite the largest ship of the fleet. It was now quite dusk.

'"What now?" cried Mr Edkins, as the alarm-gong struck on board the ship. 'There is not a moment to lose."

'He then commenced singing I know not what. Quaterman struck up a truly American tune...while I at the same moment raised a third with all the voice I could command. The men on the warship were shouting loudly, our boat's crew outdoing them if possible, and the whole thing was so ludicrous that I could control myself no longer. I burst into a fit of laughter most inappropriate to the occasion.

'"Who goes there?" shouted a voice from the Imperial ship.

'After a little further explanation we were allowed to pass, upon which my companions began to lecture the boatmen for having called us 'white devils'. The poor men, who had not yet received their day's pay were very penitent.'


Warning: count(): Parameter must be an array or an object that implements Countable in /home/alisonll/public_html/templates/rt_metropolis/html/com_k2/default/item.php on line 248

Make sure you enter all the required information, indicated by an asterisk (*). HTML code is not allowed.