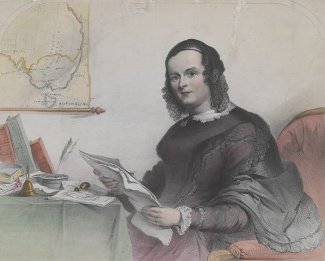 New South Wales wanted female immigrants in 1841. But when the young women and girls got off the ships in Sydney, they often had nowhere to go, just like Letty.

Sometimes women and girls stayed in the caves around Sydney's shore near the Domain.

Caroline Chisholm was the wife of a British army officer living in Sydney. She was upset to see female immigrants homeless and badly treated. Mrs Chisholm talked Governor Gipps into letting her use an old army barracks as a temporary home for immigrants. Setting up the Female Immigrants Home wasn't easy! Caroline Chisholm wrote to the Parliament in England about her work. She described her first night in the building:

'I retired weary to rest. Scarce was the light out, when I fancied a few dogs must be in the room, and in some terror, I got a light. What I experienced on seeing rats in all directions I cannot explain. I lighted a second candle and sat on my bed, until three rats, descending from the roof, alighted on my shoulders. I knew I was getting into a fever, but to be out-generalled by rats was too much. I had two loaves and some butter; I cut it into slices and placed the whole in the middle of the room. With a light by my side I kept reading and watching the rats until four in the morning. I at one time counted thirteen, and never less than seven did I observe. The following night I gave them a similar treat, with the addition of arsenic [poison]; and thus passed my first four nights at the Home.’

[Abridged extract from “Female Immigration Considered in a Brief Account of the Sydney Immigrants Home”  © University of Sydney Library. P ortrait of Caroline Chisholm used with permission from National Library of Australia.]