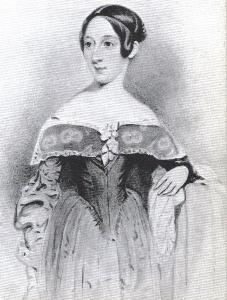 If they had enough money, Victorian women loved to decorate their clothes with lace, ribbons and ruffles. Until sewing machines became available in the 1850s, all these clothes had to be made by hand. Every time a dress was washed, the lace had to be taken off. So Victorians' clothes didn't get washed often.

Underneath their dresses, girls and women wore a lot of underwear. To get dressed, you put on: 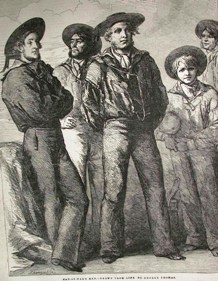 In England all the layers of clothes helped to keep people warm. But in Australian summers, those undies were very uncomfortable.

Female hairstyles were pretty and complicated. With a bit of work, you can curl your hair Victorian-style too.

Illustrations:
Above: Unknown colonial lady, by ex-convict artist Thomas Brock, around 1840.
Left: Victorian sailors. Illustrated London News. See how young the sailor on the right is.